Every Monday we feature a member of the LIVE A GREAT STORY community who is building an entrepreneurial passion that's making a positive impact in the world. 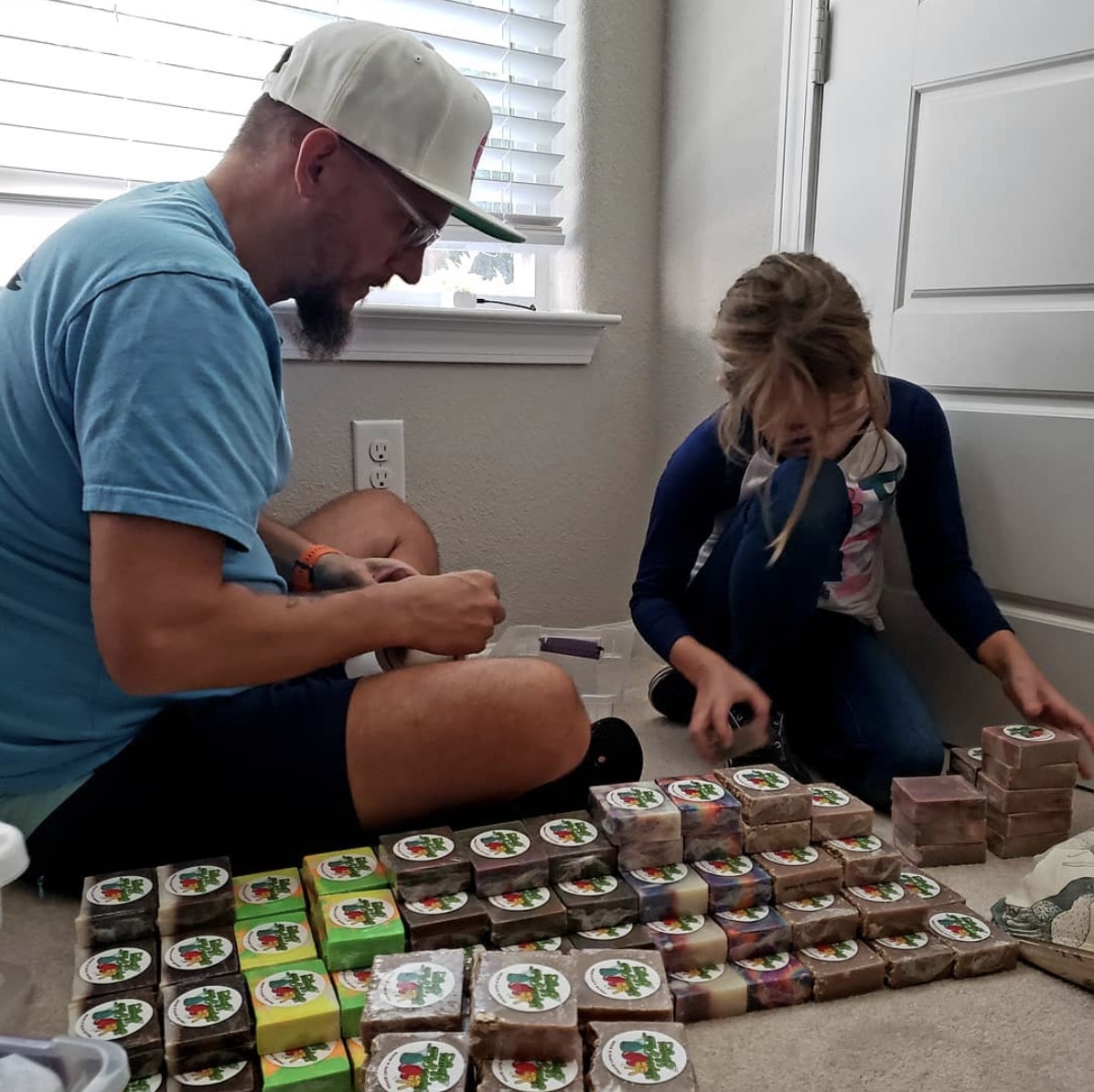 So we actually started when Kaley was in utero. We started the company about nine years ago with her just kicking around.

We started reading some labels and we were completely just flabbergasted about what kind of garbage was in products and we're like, "Wow, we're not going to put our child in a bath full of chemicals."

Were reading like the science of babies and how the skin absorbs everything into it within like 30 seconds. And we quickly decided we couldn't do that.

So we started reading some labels and then we watched a couple of YouTube videos and realizes, "We can do this, let's do it."

There was some initial momentum but you ended up putting the idea to the side, but now it's back?

Yeah, initially we got a really great following. But I reflect back on it and realize it was one of those moments where we quit a little bit sooner than it was all going to happen.

I think part of it was because we had a cross country move and some of our other stuff got in the way and we just kind of dabbled in it a little bit.

But we went back probably about six or eight months ago and started reading some of our reviews from our old Facebook posts and, and people were saying how great it was, how it was the best.

We got it reinvigorated over it and started doing some more work on the idea.

The way that I look at it, this is kind of our Phoenix moment. We saw what happened with how things were working before and we kind of saw the ramp, we saw the progression, and now we're just, we're not trying to duplicate it, but we're trying to set down the stepping stones so we get back to that level of awesomeness again. 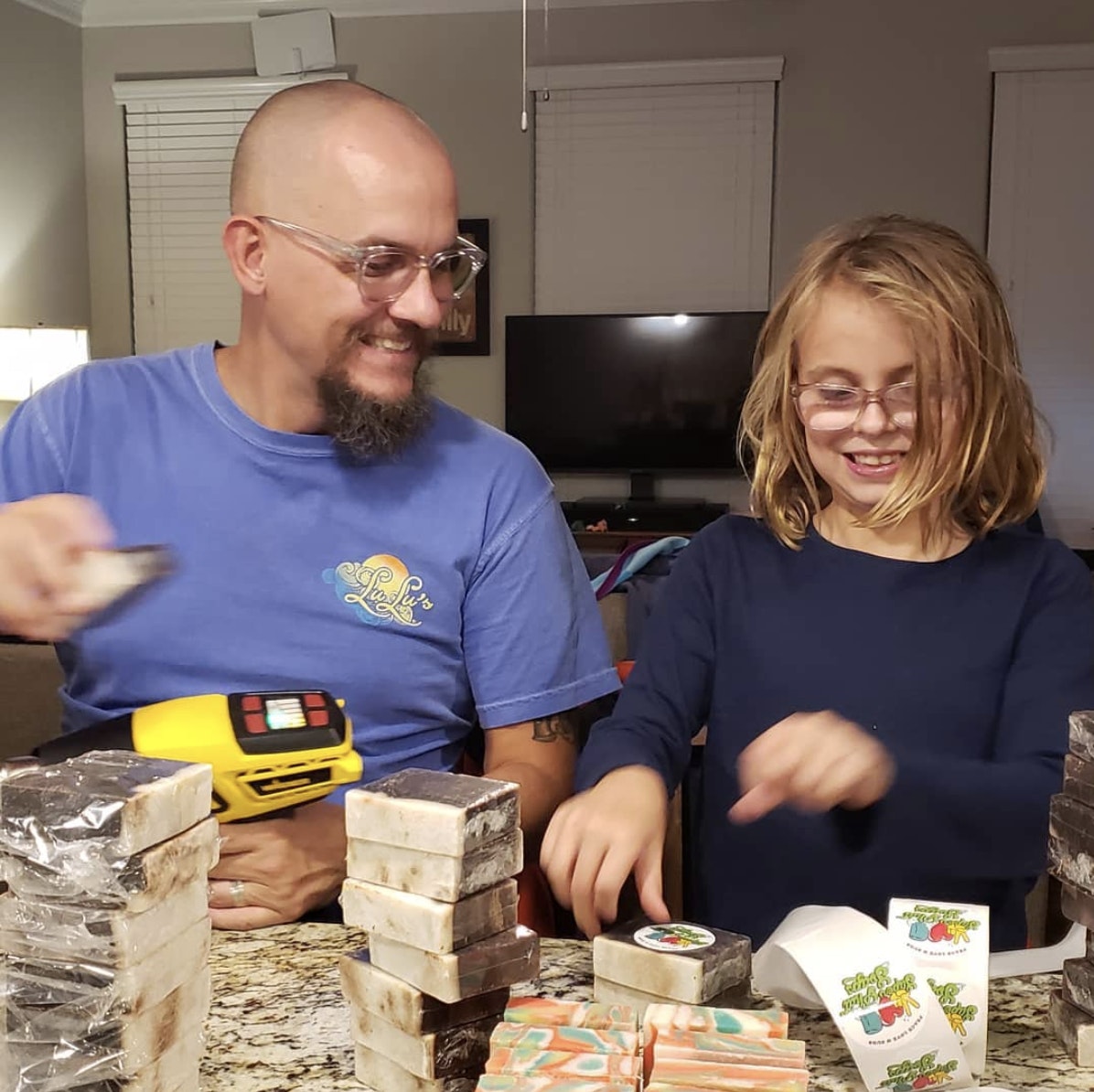 What are you doing differently this time?

This time around we're trying to create a lifestyle brand.

It's all-natural soap, no animal products in it. No harmful testing with a kind of summer of love, you know, peace, love and hippie type of vibe to it.

And it's something that we thought it was kind of the tent that you put up that everybody can get underneath, right? Unless you like to like stink. That's really the only people that are kind of excluded. Like you don't even want to smell good and get clean then I guess you guys can't hang out with us.

Then our eight year old got involved in it and she was really digging the science of it and getting into the formulas and things like that. And she just went crazy with it. Her eyes lit up when I ordered 3000 stickers.

What kid doesn't love to put stickers on stuff and then she sees, you know, 3000 of them said no living room. And I was, I was absolutely scared to death because I like to think about was an entire wall of things being stickered.

I bet you have some interesting stories and learning experiences! Any specific memorable ones?

You know, you've got to deal with lye and anybody has seen Fight Club, you know, the, he gets burned by it. So you gotta be careful with your kids.

Very early on I messed up like 10 pounds of it which is almost, you know, 40 bars. And it was because I was trying to balance with her what was going on, the safety aspect of it.

And then I realized at the end that we're supposed to have this amazing rainbow-colored soap and because I forgot to add something at the right time, it was brown because everything got mixed together. 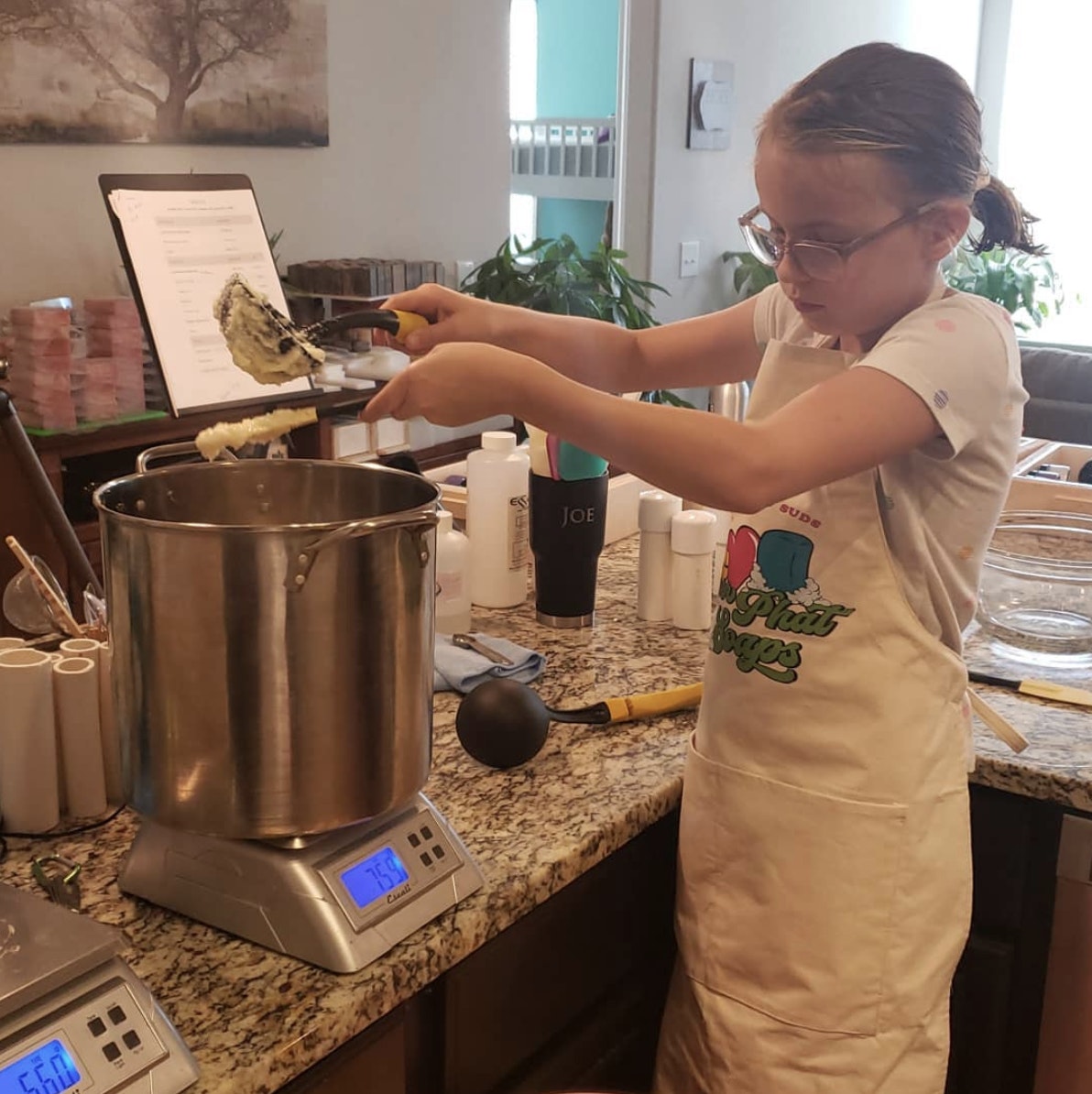 What do you think are some of the other lessons that you're seeing her learn firsthand through this experience?

I let her run the show when we go out and we sell stuff at popups shows. It's helped her kind of get out of her comfort zone, talking to people and then learning how to do money and just being personable so people like you and then buy your stuff.

Recently we had the experience of going out with a bunch of stuff with the expectation of selling it. But then we ended up bringing home two-thirds of it because it just wasn't that great when it came to foot traffic.

It was a learning experience because you can teach people how to make stuff and it may, it may reduce a very small percentage of your people that you can, you know, your market if you will. But it's fun to be able to share that gift and be able to, um, you know, share that piece of it as well because, because people really react positively to, um, learning how to do something and, and you know, a lot of times they'll just learn it for the experience and they'll never do anything more with it.

What are some of the lessons you've learned through this process?

The cool thing with me is that I have to learn a different aspect of business now too because she's that tabula rasa, she's, she's just absolutely learning everything.

So my reactions need to be tempered not only from my own benefit but strictly for hers. She's learning things because she's watching me, you know, she's watching everything happen. 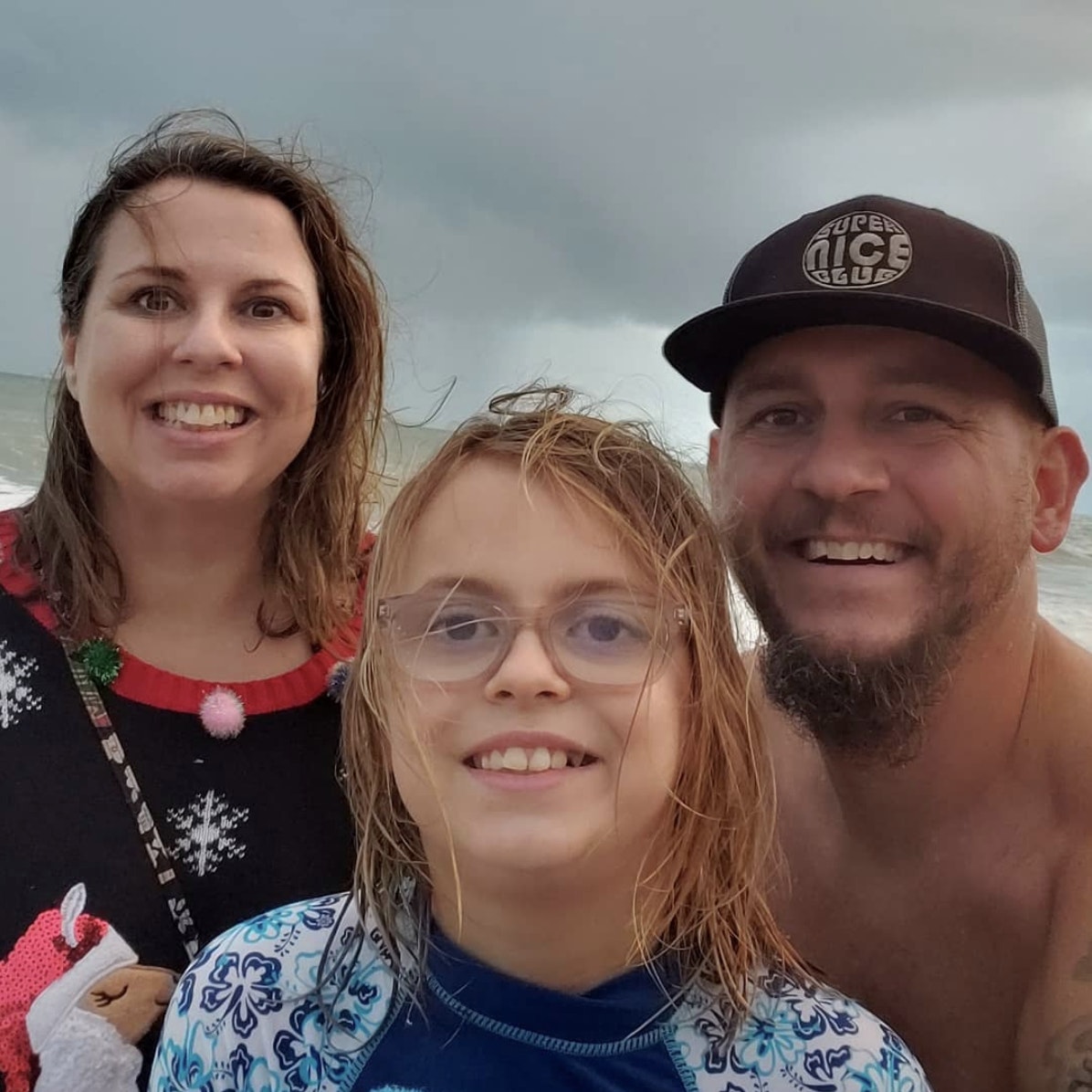 What are you doing to differentiate yourself from other soap companies?

If you've ever looked at your shower or anybody else's shower, there are plastic bottles everywhere. And you can't necessarily recycle all that stuff. And if people don't take the initiative or it's just not a plastic that gets recycled, think about how many bottles of shampoo or bottles of body wash or whatever that you've thrown out in your life so far.

So everything that we have that the packaging that it comes in is recyclable.

So the buckets and the glass bottles, all that stuff is recyclable. So we're trying to make sure that we have a zero-waste facility. I shrink wrap the soap right now because it's just the best way to not get it damaged and try to keep the costs low, but it's a shrink wrap that you can recycle at the grocery store with your plastic bags.

We try to make sure that our environmental impact is as close to zero as possible because we don't want to contribute to that on any level. Whether we remain a small to medium size business or we become a soapy empire. That's just the way we want to continue this through all the way.

And by instilling that in our daughter, she's going to bring that through hopefully to everything that she does, as well. So the environmental theme has been super important for us to make sure that we talk about.

One thing that is probably the best thing that I would share is to be authentic.

So that level of almost over the top transparency I think is super important for anybody that's in business and I think that's agnostic of what you're doing or what you're selling.

The other reason I think we picked this back up again is that I was kind of dying on the inside not having a creative outlet.

For me a really great friend of ours helped to bring that out.

It was him saying, "Well, why the hell aren't you doing this?"

And then it was for me to look in the mirror and go, "Why the hell am I not doing this?"

If you can have someone say that to you six months before you realize it, that six months is amazing. So that's where you need someone to be able to help you with that.

And when you have that, those people, that tribe that circles around you, you don't realize how valuable that is because sometimes you're stuck in the echo chamber and you just, you want to hear what you want to hear.